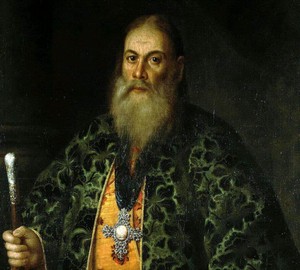 The representative of Russian painting of the Baroque era A.P. Antropov is known as one of the founders of portraiture. As an official artist of the Holy Synod, Antropov had to write clergy. Noteworthy is his portrait of Archpriest F. Ya. Dubyansky, kept in the Hermitage.

Fedor Yakovlevich Dubyansky was an influential person during the reign of Elizabeth Petrovna and Catherine II. A native of the Chernihiv region and a native of the Ukrainian clergy, Dubyansky successfully married the daughter of the confessor of Tsarevna Elizabeth K. Shargorodsky. After the death of his father-in-law, F. Ya. Dubyansky, according to the custom of the white clergy, inherited this place.

Due to the proximity to the favorite of Elizabeth Petrovna Alexei Razumovsky, Dubyansky had a great influence at court. The empress was an exemplary Christian and always listened to the advice of her confessor. Through Dubyansky, she transmitted her orders to the Holy Synod. He, taking advantage of his position, often acted contrary to the opinion of the highest spiritual organ and even intervened in the appointment of bishops.

Fedor Yakovlevich retained his influence upon the accession to the throne of Catherine II. She was grateful to him for the fact that he had at one time helped her to avoid being expelled abroad. In return, Catherine II also мейд Dubyansky her confessor. In 1761, Fedor Yakovlevich was elevated to the nobility, he owned 8,000 serfs, several estates and mansions. Dubyansky was famous as a man of wide views and very enlightened for a representative of the clergy.

The portrait was painted by Antropov in the year of the 70th anniversary of the archpriest and the award of the nobility to him. A strong, full of dignity old man with a smart look, large features, a rich beard looks at us. With his left хэнд he rests on a pastoral staff with a silver knob, in his right he holds a scroll with the words from the one hundred forty five psalm “Praise be to my soul, Lord.”

His rich attire emphasizes his new status as a nobleman and recalls his dignity. At that time, there were still no strict rules on wearing the clothes of clergy. In Dubyanskoe, a velvet green garment trimmed with gold braid is worn with an ornament, under it is a yellow silk shirt, belted with a richly embroidered sash. On the chest is a pectoral cross adorned with precious stones. In those days, only the highest representatives of the clergy could wear such crosses.

The yellow-green color of the painting and the static pose of Dubyansky refers us to the traditions of icon painting and parsuna. These influences were still strong in the work of Antropov, who was at the origins of the emergence of the Russian portrait genre."