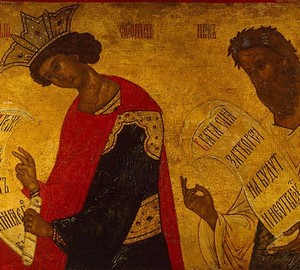 Prophets king Solomon and Ezekiel – Unknown artist. The beginning of the XVI century. Wood, tempera, gilding. 61,5×98
Icon with images of the Old Testament prophets of Solomon and Ezekiel originally placed in the iconostasis, which in the Russian Orthodox Church separates the altar from the main building. In the fourth “prophetic” row, above the “festive” row, are the icons of the Old Testament prophets with scrolls in their hands. The prophets are mediators between the higher powers and humanity, they predicted the appearance of the Virgin and the birth of Jesus Christ.

In the hands of Solomon and Ezekiel – scrolls with sacred text. Solomon is depicted as a king, in elegant clothes and with a crown on his head. The gold icon was painted by a Moscow master at the beginning of the 16th century. The interpretation of the faces and figures of the holy preachers is distinguished by a soft line, it is characterized by a special lyricism, which is one of the features of the icon-painting school of that time. Similar images appeared in Russian art at the beginning of the 15th century and were largely associated with the name of Andrei Rublev."