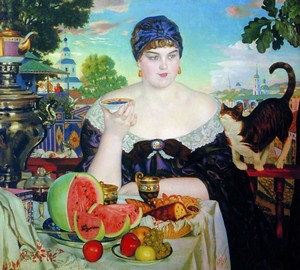 One of the favorite characters in the works of Kustodiev was a burly, healthy merchant merchant. The artist painted merchants many times – in the interior and against the backdrop of the landscape, naked and in elegant dresses.

The painting “Tradeswoman at tea” unique in its impressive strength and harmonious integrity. In the Russian beauty sitting on the balcony at the table, laden with dishes, a white, immense thickness, the image of the merchant acquires a truly symbolic sound. The semantic load is borne by the details: the fat lazy cat rubbing on the shoulder of the mistress, the merchant couple drinking tea on the next balcony, the city with churches and shopping arcades in the background, and, in particular, the magnificent “gastronomic” still life. A ripe red watermelon with black stones, a fatty cupcake, buns, fruits, porcelain, a large samovar – all this is written in an unusually material and tangible and at the same time not illusory, but deliberately simplistic, as on shop signs.

In the hungry year of 1918, in the cold and ruin, the sick artist dreamed of beauty, a full-blooded vibrant life, and plenty. However, savoring a well-fed, thoughtless existence is accompanied here, as in other works by Kustodiev, with a slight irony and a malicious smile. Irony, grotesque, decorative stylization, a combination of full-scale observation and fiction bring Kustodiev closer to other world artists. At the same time, Kustodiev’s work is more optimistic, cheerful and national.

In addition to easel works, Kustodiev, who also worked in the Soviet era, performed a number of book illustrations and theatrical decoration."