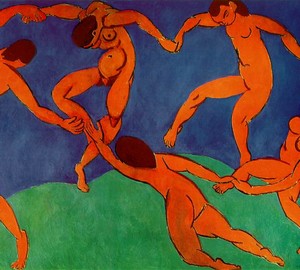 The panel “Dance” (along with “Music”) was ordered by Henri Matisse to S. I. Schukin to decorate the stairs of the mansion in Moscow. Before being sent to Russia, it was exhibited at the Autumn Salon and caused a scandal: the organizers and spectators called the artist crazy, and the customer got it, who was accused of collecting garbage.

Matisse’s mentor Gustav Moro predicted that the student would “simplify painting.” The method of simplifying and schematizing figures, where one line conveys the shape of the figure, is clearly present in the “Dance”. The picture depicts a round dance of five naked people who, holding hands, dance on top of a hill. The bright sound of three colors – red, blue and green – enhances the viewer’s impression of the monumental canvas, conveys a sense of dynamics. The artist puts paints in large spots, circling them with clear contours, refusing from black and white modeling of volumes and transmitting the depth of space. Pressure and power, enclosed in pure colors, convey feelings and passions that have escaped to the surface. The round dance motif was repeated many times in European art, while in Matisse it becomes the embodiment of rhythm and expression of the 20th century."