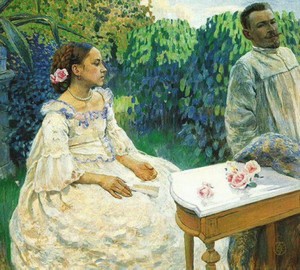 Self portrait with sister – Victor Elpidiforovich Borisov-Musatov. 1898. Oil on canvas. 143×177
Victor Elpidiforovich Borisov-Musatov (1870-1905) is a unique master of the turn of the century, combining in his work the aesthetics of symbolism that arose at the turn of the 19th and 20th centuries and the “retrospective daydreaming” characteristic of the masters of the Art World art association.

The images created by the artist amaze with their timeless detachment and mystery. As if frozen in a distant era, heroes appear before the viewer Self Portrait with Sister. Fourteen-year-old Elena, dressed in a dress of the 1840s, is the embodiment of fragile femininity, an almost ghostly vision. The artist who portrayed himself only half as if deliberately cuts off the “frame” snatched from the oblivion of the past, which was covered with fog. Represented as if by the spirits of deserted noble nests, they evoke perfect memories of the 19th century estate culture, according to which the era of the 1890s had already begun to nostalize.

The pair portrait of the Borisov-Musatovs is in tune with the Tyutchev lines: “My soul is an elysium of shadows, ethereal shadows, bright and beautiful.” Heroes freeze from the inability to express the drama of the human soul, its bottomlessness, and therefore are doomed to eternal silence."