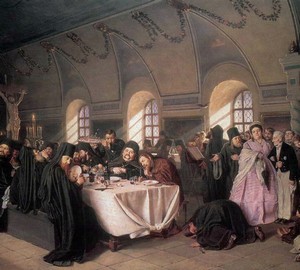 Vasily Grigorievich Perov is an outstanding master of the 1860-1870s, whose theme was the exposure of the imperfections of modern society. His paintings reflected the fate of the “humiliated and insulted” that worried the Russian intelligentsia, the lives of specific people, their pain and suffering. Uniting in their opposition to the “darkness” of reality, writers and artists sharply criticized and passionately condemned the vices of humanity and the injustice of the social system.

Canvas “Meal” presents to the viewer a scene of a monastic dinner with a luxuriously laid table full of various dishes. The composition unfolding before our eyes as if illustrates the abomination of behavior and the ugliness of the essence of the clergy represented. In the general noise of the bacchanalia against the backdrop of the crucified Christ, the reddened priests indulge in earthly pleasures – drunkenness and gluttony, in the right part of the picture one of the dignitaries crouches in front of a rich lady. The booth arranged in the temple, depicted by Perov, reveals the true face of the church of that time. According to a contemporary of the artist, F. M. Dostoevsky, “disappeared And the borders of good and evil were erased.”

Citizenship of poetry and painting of the 1860-1870s, in which straightforwardness is often encountered, caustic irony, expressed in the general redundancy and everydayness of the story, is perceived today not as a flaw, but as a feature of the “artistic grief” of the era. It is no coincidence that many of the artist’s works were not allowed to be displayed at exhibitions and shown to the public."