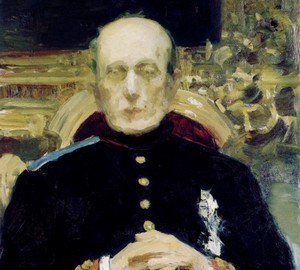 For all the breadth of his artistic interests, Repin was still primarily a portrait painter. A deep connoisseur of people and a psychologist, he knew how to see in his works the essence of an individual human character, revealing at the same time in the image created by him the features typical of the whole social layer, allowing him to see the signs of the era in the characterization of an individual person.

Already at the threshold of the 20th century, Repin created a remarkable, one-of-a-kind canvas — a grandiose group portrait “The meeting of the State Council”, painted by official government order. The task before the artist was very difficult. It was necessary to depict on canvas more than eighty dignitaries who were present at the anniversary meeting, while observing the strict order in the arrangement of each of its participants. Repin brilliantly coped with all the difficulties of compositional and pictorial solution of the picture, avoiding false pomposity. On the contrary, the picture leaves an impression of an impartial, sharp denunciation of the true essence of the ruling elite of pre-revolutionary Russia.

In the process of working on the painting, Repin wrote etudes-portraits of her characters.. Performed in a free, wide manner, most often in one or two sessions, these sketches are one of the highest achievements in Repin’s work.

Portrait of Pobedonostsev one of the best of them. Among the high-ranking dignitaries of the autocracy, Pobedonostsev was one of the most terrible figures. A convinced reactionary, a merciless strangler of any sprouts of freedom, he personified the whole obscurantism of his time. Outwardly correct, restrained, dryly polite, he was as if deprived of natural human feelings. So Repin presented him in his portrait.

The subtlest, barely perceptible shades of color, free, as if even careless, but in reality subordinate to precisely adjusted drawing strokes, captured, or rather, revealed dry, foreign lips to a smile, a cold look of half-closed eyes for centuries, the whole hypocritical appearance of a person incapable of living mental movement empty and merciless.

This portrait, painted in such an unusual way for Repin, but so natural here, is one of Repin’s most powerful and artistically perfect works, completing the artist’s heyday."