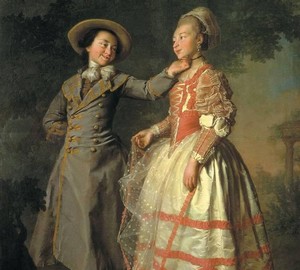 The paintings present the viewer with cheerful, full of girlish enthusiasm and beauty of young girls. The artist’s task was to capture the smolyanoks not in the usual ceremonial portraits, but to try to catch the individual features of each, revealing the character in theatrical productions as much as possible. This perfectly reflects the general atmosphere of the Catherine era, which was distinguished by an abundance of masquerade balls, beloved by the empress.

Smolyanka Khrushchova and Khovanskaya act out the scene from the comic opera-pastoral “The vagaries of love, or Ninette at court.” Dressed as a shepherdess, a ten-year-old Khrushchova (girls played male roles in a female institute), with a playful gesture, touches the chin of a young Ninetta coquette, in whose image – Khovanskaya. The touching scene of love presented by the girls is full of naturalness and lively play."