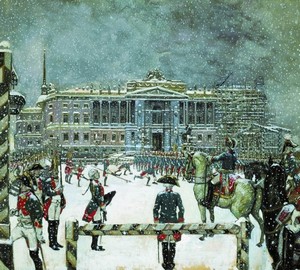 The “echo of the past tense” is heard in the image of the panorama of Petersburg at the end of the 18th century. The viewer still faces the unfinished Mikhailovsky Castle, in which the emperor will later be killed. In the meantime Paul I, sitting on a white horse, commands a parade of troops. The king’s addiction to military drill and the organization of armies for amateur parades and buildings satisfying his vanity are ridiculed by the artist. The stiffness and discipline of the parade atmosphere is felt in the graphic and linearity outlined in the details – the honed steps of the march with the feet of the soldiers raised at the command, the even rhythm of the verticals of weapons and scaffolding in the background.

The compositional solution of the work is interesting – Benoit moves the parade away from the viewer by the frame of the barrier, thereby giving the work a “picture” sound, rather than immersing it in what is happening. Flying snowflakes bring revitalization and a peculiar cosiness to the image of an event of a bygone era."