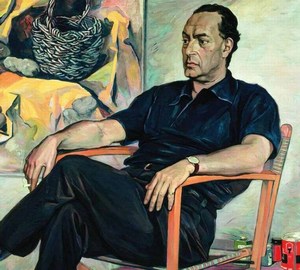 Portrait of the Italian artist Renato Guttuso – Pavel Dmitrievich Korin. 1961. Oil on canvas. 115×112
The homeland of Korin – the village of Palekh, Vladimir Region – is the ancient center of Russian art crafts. great-grandfather and father Korin were icon painters. Iconography was trained in his youth by local artists Pavel Korin. As a sixteen-year-old boy, he came to Moscow to work in the icon-painting chamber of the Donskoy Monastery. The fate of Korin was greatly influenced by his acquaintance with M.V. Nesterov, who generously shared his knowledge, experience with young artists and for many years became his close friend. On the advice of Nesterov, Korin entered the Moscow School of Painting, Sculpture and Architecture, where his mentor was S.V. Malyutin and K.A. Korovin.

Korin enthusiastically welcomed the October Revolution. He believed that the victory of the rebellious people means the victory of the heroic principle in art. In his conviction, the severe and beautiful revolutionary era should have corresponded to works of tremendous emotional power and the power of revolutionary content, courageous, pathetic and passionate. The main thing for his work, he considered creating a contemporary image. “The task of the artist and the difficulty of the artist is to show not random and particular, but the essence, meaning, leading trends of life, time“, – wrote Korin in one of his articles. Masters attracted strong, integral characters, the difficult fate of courageous people, fighters and the idea, creators, thinkers. It was to such, courageous and uncompromising, spiritually rich and generously giving people his talent, he saw a modern man. Heroes of Corinthian portraits – artists, writers, artists, musicians.

Portrait of Renato Guttuso – one of Korin’s later works. In Guttuso, he saw, first of all, a talented artist, a thoughtful, serious person. Korin called people of such a warehouse "aristocrats of the spirit". The main фокус in the portrait is on the face and hands of the model. The expressiveness of the image contributes to a clear linear pattern, a careful selection of the necessary interior details, a dense energetic smear. In the unusual color of the portrait that was unusual for Korin, in the abundance of sun in it, in the thoroughness of the transmission of each subject, the master’s desire was expressed to emphasize his love for the nature of Italy, respect for the talented painter."