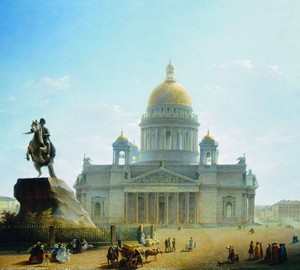 St. Isaac’s Cathedral and the monument to Peter I – Maxim Nikiforovich Vorobyov. 1844. Oil on canvas. 102×131
Maxim Nikiforovich Vorobyov (1787-1855) – landscape painter of the first half of the XIX century. His work cannot be strictly attributed to images of nature species or sketches of urban architecture. While serving in the imperial court and accompanying numerous expeditions, Vorobyev often had to paint paintings depicting important diplomatic events in the life of the fatherland. But in the artistic heritage of the master there are also classical landscapes, not devoid of lyrical feelings.

Painting “St. Isaac’s Cathedral and the monument to Peter I” It was painted shortly after the completion of the long-term construction of the temple by the project of O. Montferand and the erection of an equestrian monument to the emperor by the sculptor E. Falconet. The view captured by the artist is curious. Knowing that the point from which the work was written is located on the embankment, the view from above becomes amazing from which Vorobyov supposedly looks at people passing by the square and passing crews."