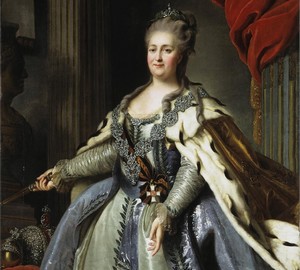 Fedor Stepanovich Rokotov is one of the greatest Russian portrait painters of the second half of the 18th century. Ceremonial Portrait of Empress Catherine Alekseevna was painted by him based on the portrait of the Swedish artist Alexander Roslin. According to the original, Rokotov recreated the image of the empress at a young age: a smooth white face, the absence of wrinkles, a deep neckline, which is covered in adulthood.

Rokotova Catherine II – the mistress of the empire and a woman in the prime of life. Imperiously clutching the scepter in her хэнд, she points with an imperious gesture towards the imperial regalia and the bust of Peter I with the motto “Started accomplishes” inscribed over it. The work is executed in silver, color gradations emphasize the whiteness and freshness of the face that stands out against a dark background. The solemn red curtains indicate the special status of the model.

Until 1918, the portrait was in the Romanov Gallery of the Small Hermitage."